The front and backend devices are linked by a virtual communication channel, guest networking is achieved by arranging for traffic to pass from the backend device onto the wider network, e.g. using bridge, routing or Network Address Translation (NAT).

Virtualised network interfaces in domains are given Ethernet MAC addresses. By default xend will select a random address, this will differ between instantiations of the domain. If it is required to have a fixed MAC address for a domain (e.g. for using with DHCP) then this can be configured using the mac= option to the vif configuration directive (e.g. vif = ['mac=aa:00:00:00:00:11']).

When choosing MAC addresses to use, ensure you choose a unicast address. That is, one with the low bit of the first octet set to zero. For example, an address starting aa: is OK but ab: is not. It is best to keep to the range of addresses declared to be "locally assigned" (rather than allocated globally to hardware vendors). These have the second lowest bit set to one in the first octet. For example, aa: is OK, a8: isn't.

In summary, an address of the following form should be OK:

It's recommended to use a MAC address inside the range 00:16:3e:xx:xx:xx. This address range is reserved for use by Xen. The default Xen configuration uses bridging within domain 0 to allow all domains to appear on the network as individual hosts. If extensive use of iptables is made in domain 0 (e.g. a firewall) then this can affect bridging because bridged packets pass through the PREROUTING, FORWARD and POSTROUTING iptables chains. This means that packets being bridged between guest domains and the external network will need to be permitted to pass those chains. The most likely problem is the FORWARD chain being configured to DROP or REJECT packets (this is different from IP forwarding in the kernel).

iptable FORWARDing can be disabled for all packets; to prevent the dom0 from acting as an IP router: echo 0 > /proc/sys/net/ipv4/ip_forward.

A slightly more secure method is to allowing packet forwarding (at the iptables level) between the external physical interface and the vifs for the guests. For a machine with a single ethernet card this would be:

The ebtables project has an interesting document on the interaction of bridging and iptables.

Packet arrives at hardware, is handled by dom0 Ethernet driver and appears on peth0. peth0 is bound to to the bridge, so its passed to the bridge from there. This step is run on Ethernet level, no IP addresses are set on peth0 or bridge.

Now the bridge distributes the packet, just like a switch would. Filtering at this stage would be possible with ebtables.

Now there's a number of vifX.Y connected to the bridge, it decides where to put the packet based on the receiver's MAC.

The vif interface puts the packet into Xen, which then puts the packet back to the domain the vif leads to (its also done that way for dom0, hence the vif0.0->(v)eth0 pair).

The target device in the dom0/domU finally has an IP address, you can apply iptables filtering here.

When xend starts up, it runs the network-bridge script, which:

It is good to have the physical interface and the dom0 interface separated; thus you can e.g. setup a firewall on dom0 that does not affect the traffic to the domUs (just for protecting dom0 alone).

When a domU starts up, xend (running in dom0) runs the vif-bridge script, which:

The $1 will use the argument of xend (in the /etc/xen/xend-config.sxp configuration file). If there is a default physical network interface, the standard network-bridge script of Xen will create a vif for this interface, and not the other ones also. 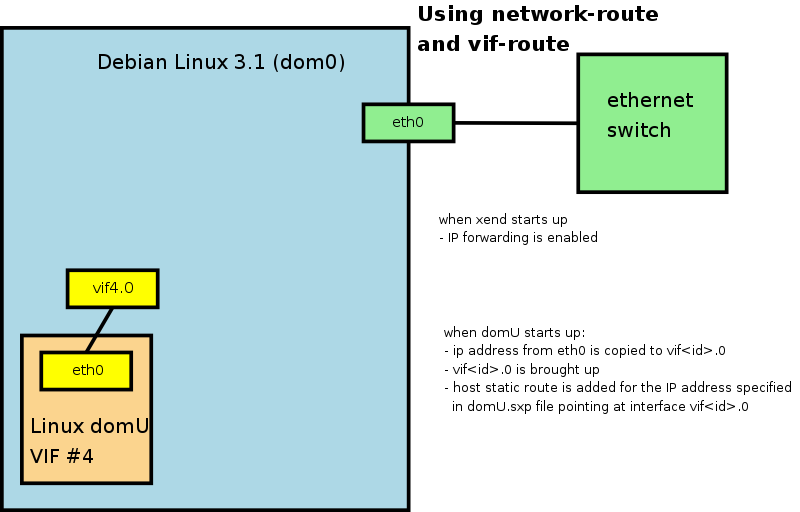