A Xen guest typically has access to one or more paravirtualised (PV) network interfaces. These PV interfaces enable fast and efficient network communications for domains without the overhead of emulating a real network device. Drivers for PV network devices are available by default in most PV aware guest OS kernels. In addition PV network drivers are available for various guest operating systems when running as a fully virtualised (HVM) guest, e.g. via PV on HVM drivers for Linux or the GPL PV drivers for Windows.

As well as PV network interface fully virtualised (HVM) guests can also be configured with one or more emulated network devices. These devices emulate a real piece of hardware and are useful when a guest OS does not have PV drivers available or when they are not yet available (i.e. during guest installation).

An emulated network device is usually paired with a PV device with the same MAC address and configuration. This allows the guest to smoothly transition from the emulated device to the PV device when a driver becomes available.

The emulated network device is provided by the device model, running either as a process in domain 0 or as a Stub Domain.

When the DM runs as a process in domain 0 then the device is surfaced in the backend domain as a tap type network device. Historically these were named either tapID (for an arbitrary ID) or tapDOMID.DEVID. More recently they have been named vifDOMID.DOMID-emu to highlight the relationship between the paired PV and emulated devices.

For the remainder of this document PV and Emulated devices are mostly interchangeable and we will use the PV naming in the examples.

A MAC address must be unique among all network devices (both physical and virtual) on the same local network segment (e.g. on the LAN containing the Xen host). For this reason if you do not have your own OUI to use it is in general recommended to generate a random locally administered address (the second option above) rather than using the Xen OUI (the third option) since it gives 46 bits of randomness rather than 24 which significantly reduces the chances of a clash. 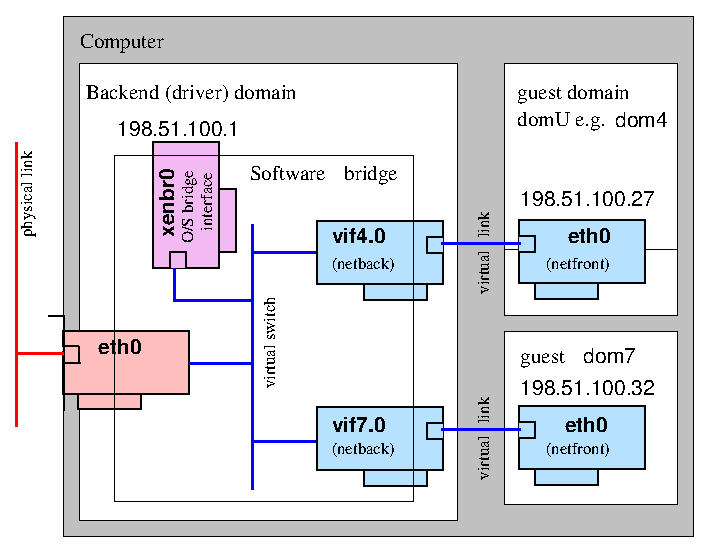 With XL and xend the bridge to use for each VIF can be configured using the bridge configuration key. e.g.

The Xen 4.3 release will feature initial integration of Open vSwitch based networking. Conceptually this is similar to a bridged configuration but rather than placing each vif on a Linux bridge instead an Open vSwitch switch is used. Open vSwitch supports more advance Software-defined Networking (SDN) features such as OpenFlow.

Set up openvswitch according to the Host Networking Configuration Examples.

If you want openvswitch to be the default, add the following line to your xl.conf file:

If you have given the openvswitch bridge a name other than xenbr0, you will need to update that default as well:

Alternately, you can specify the new script (and bridge, if necessary) in each config file by adding script=vif-openvswitch (and possibly bridge=ovsbr0) to the vifspec of individual vifs in config files. See xl-network-configuration.markdown for more information.

Xen 4.3 ships with a vif-openvswitch hotplug script which behaves similarly to the vif-bridge script, except that it attaches the VIF to an openvswitch switch (named via the VIF's bridge parameter).

In addition to naming the bridge the openvswitch hotplug script supports an extended syntax for the bridge optio which allows for VLAN tagging and trunking. That syntax is:

To add a vif to bridge xenbr1 trunked and receiving traffic for VLAN 101 and 202:

The recommended method for configuring networking is to use your distro supplied network configuration tools as described in Host Configuration/Networking.

Network Address Translation or NAT is a form of routing which gives each guest VIF its own IP address on a private/internal network, often using RFC1918 addresses, and performs address translation at the router/firewall (e.g. domain 0) to connect the entire private network to the rest of the network via a single public IP address.

Setting up NAT on the host

Setting up NAT is similar to configuring Routing as described above with the most obvious difference being that one should enable NAT in the backend domain.

The recommended method for configuring networking is to use your distro supplied network configuration tools as described in Host Configuration/Networking.

Prior to Xen 4.1 when xend started up it would run the network-nat script which perform the necessary configuration. However this mechanism was fragile and prone to breaking and therefore is no longer recommended.

In a NAT'd configuration virtual devices are given IP addresses on a private network, typically an RFC1918 internal network. Guests may either be configured statically with addresses in the chosen network space or you can chose to run a DHCP server within that network (perhaps on the host itself) to provide addresses to guests.

Once configured according to Host Configuration/Networking then the VLAN devices can be treated like any other device and used for either routing or bridging.

By combining the above with the networking capabilities of the host OS it is possible to create more complex configurations to suit various different requirements.

Virtual network using a brouter.
This configuration uses a bridge with no physical device shared by the guests. The bridge an IP address in domain 0 which is then use routed (or even NATed) to the external network (hence bridged router). See "Xen3 and a Virtual Network" for a more complete description of this type of configuration.

The following attempt to show some common networking topologies used with Xen. See Network Configuration Examples (Xen 4.1+) for examples of how to achieve these configurations using distribution provided tools.